It’s a pretty neat product, but it might not be something for the average home cook.

It’s a safe assumption that we’re all a bit more careful about cleanliness and hygiene best practices, you know, considering the deadly, ongoing coronavirus pandemic. It makes sense people would want to keep their knives and kitchen gear cleaner than usual.

Personally, I was once largely unconcerned with germs and getting sick. Crowded trains, eating food I dropped on the floor, grungy dive bars — hell, even flu season as a concept — none of it worried me. Nowadays, like most of us, I’m masked up, stocked with hand sanitizer, and generally avoiding being around too many people at once, if I can help it.

The for knives and flatware that launched on IndieGogo in August. Now, to be clear, I am not suggesting the Hookee is a product aimed at combating COVID-19 — in fact, it’s relatively unlikely a knife, inside your own home, would give you the virus. But rather, it’s a product aimed at borderline excessive cleanliness in a world focused on that.

I tested a Hookee Knife Guard out and it’s neat, although I’m not entirely sure it’s something I’d buy for my own home. Here’s how Hookee says the product works: You take a dirty knife or piece of flatware, wash it with soap/water (per usual), then simply slide it the Hookee Knife Guard. From there, the Knife Guard, sensing the wet utensils, will spring to life and thoroughly sanitize the flatware with UV light then dry it completely with temperatures up to 158 degrees Fahrenheit. It’s a relatively quick and painless process. There’s no learning curve at all.

And, at least from appearances, the product works. I really only used it for knives or big serving utensils. Small flatware I instead plopped in the dishwasher like usual. After dropping a knife in, the Hookee would hum to life and soon enough a blue-ish light would glow out of the top. Of course, I had no real way of knowing the Knife Guard had killed 99.9 percent of germs and bacteria like it claims. But in theory, it should work.

As , UV light — if applied correctly — can be effective at fighting off bacteria, basically breaking down the DNA of harmful material to stop it from spreading. I called up an expert, , a professor of environmental occupational health at the School of Public Health at Rutgers University, to talk about the Hookee Knife Guard.

In short: Laskin told me that, yes, if the product works as described, it should help sterilize knives and other utensils. He added, however, that it seems like it might be a pretty specific product, since a simple wash-and-dry usually does the trick.

“It’s a very niche thing because there aren’t a whole lot of people that are super hyper about seriously sterilizing their kitchen utensils, outside of putting in the washing machine,” Dr. Laskin said. “And probably you kill a lot of bacteria if you wash it by hand and just stuck it out and air dried it, because bacteria don’t like to be in the air. But I appreciate the fact that there are going to be people who want to buy something like [this].”

For what it’s worth, Dr. Laskin also cautioned against looking right at the UV light, saying it can sometimes be bad for your eyes.

I can picture there being buyers for the Hookee Knife Guard. Lots of folks are squeamish about handling raw meat, especially. If you wanted further peace of mind after chopping up raw chicken, for instance, it might be nice to slide your washed knife into a Hookee Knife Guard. It would be a nice safeguard against bacteria you might’ve missed with the sponge. Also sponges have been proven to be kind of gross, at times serving as a breeding ground for some types of bacteria.

Most knives get hand-washed anyway — it’s a quick process — and the Hookee is a simple way to stash it after a wash and it dries the utensil thoroughly to prevent any rust.

The Hookee looks decent on a counter as well. The model I tested was white with gray slats for placing utensils. It wasn’t particularly beautiful or anything, but it wouldn’t look out of place in any modern kitchen. All-in-all it’s a decent way to store knives while also cleaning them. 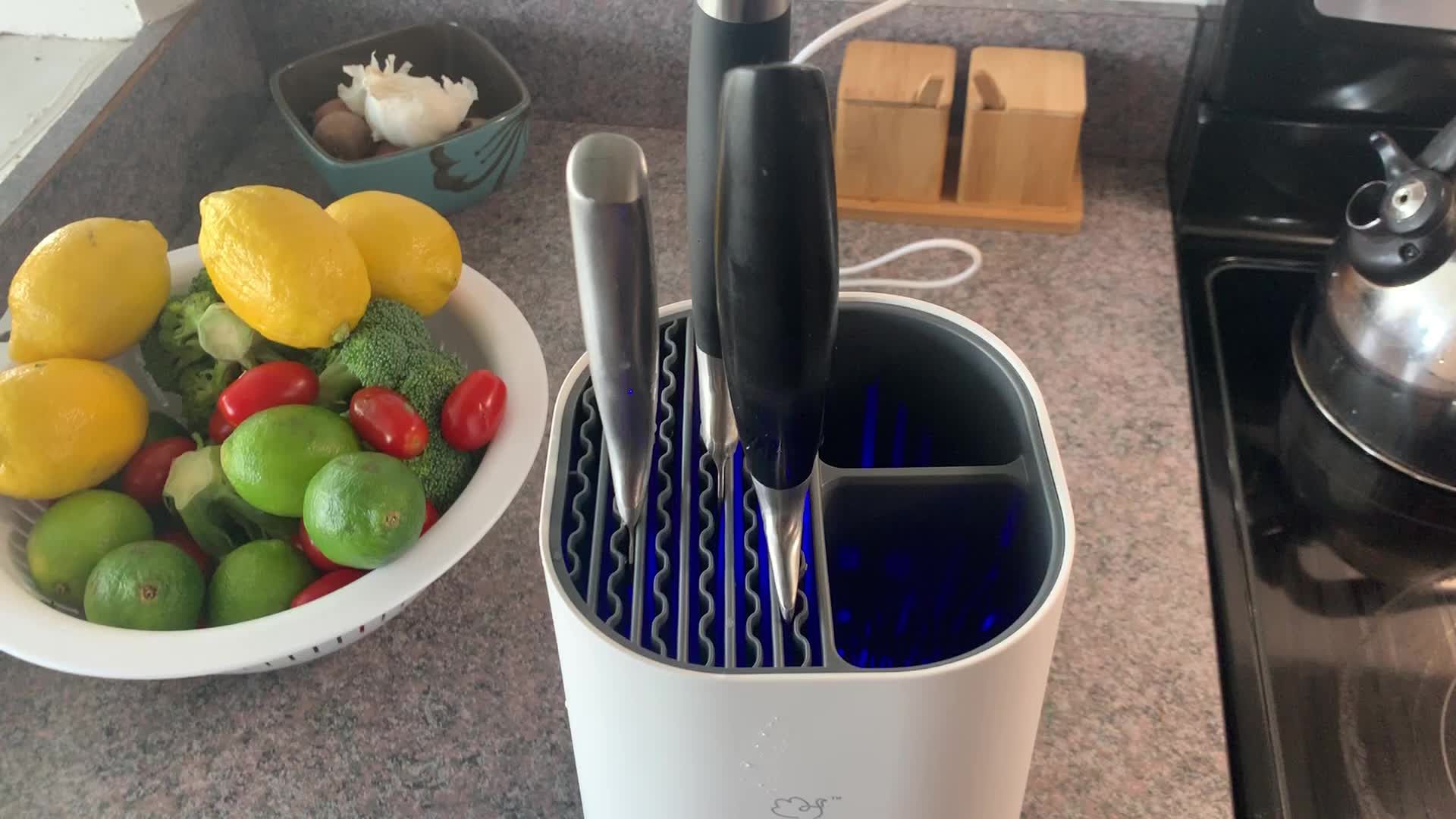 The Hookee Knife Guard hasn’t fully rolled out yet, but you can secure the delivery of one with an $84 purchase on Indiegogo or Kickstarter. The site promises shipping by November.

Now, for the $84 question: Would I recommend buying one? I’m not sure. I probably wouldn’t buy it. That’s not because I disliked the product, per se, but rather that I’ve been cooking for years and never had any issues with my cleaning procedures. I’m very careful while cooking and never cross-contaminate, but $84 still feels like reach on the Hookee Knife Guard for me. But if it gives you peace of mind, hell, I’m not judging anyone who’d spring on it.